ARK was established in 2007 by Mrs. Maggi Hall who had just completed award winning restoration project of five historic buildings for her daughter’s veterinary hospital, Florida Wild Veterinary Hospital. The veterinary hospital was located in downtown DeLand and was a favorite “dumping site” for abandoned animals. Dr. Erin Holder, Maggi’s daughter, asked for help; thus, Animal Rescue Konsortium was established. ARK became the only no kill rescue organization in Central Florida. During the 10 years Mrs. Hall was president, no animal was ever turned down – no matter the condition of that animal. ARK and Florida Wild Veterinary Hospital were able to rescue, rehabilitate and rehome over 6,000 animals during the decade Mrs. Hall was president.

In January 2018 Mrs. Hall retired and Ginny Oakwood, owner of Crescent City Kennel in Crescent City Florida, took the lead as president. ARK headquarters moved to its new location and continues its LIFE SAVING DEVOTION. There is no connection or overlap of resources between ARK and Crescent City Kennel and each operates as separate and independent entities.

My name is Lady Grace, I was left behind by my family. I lived under a house for months on my own. A neighbor noticed me and started setting food out for me. He was so patient, as I was very wary of people. After a little over a month, I finally let him near me. That’s when he noticed that I probably had babies somewhere. I finally gave in and allowed him to see my 2 pups (which they put food out for all of us). I was very malnourished; I didn’t use my back left leg. That’s when he called ARK Animal Rescue to help. ARK came and took me and my boys to see a vet. We found out that I had 2 fractures in my pelvis and a dislocated leg. I was taken to ARK headquarters where I received extra nutrition so I could build my body up for surgery. My boys were adopted to a great home. Dr. Smith fixed my leg and pelvis, after which I had rehab and started using my leg. Boy did I flourish after that. I could run around the big yard, doing “zoomies” and jump over things. I loved all the people I would see daily but still I was very untrusting of new people. Finally, the right family came along, they didn’t mind that I was stand-offish, because their dog and I got along great. They have been very patient with me allowing me to come to them and not pushing themselves on me. Now my favorite place to lay is on top of my new dad. 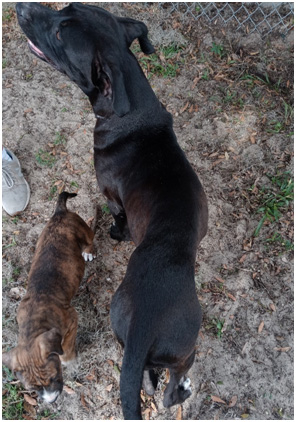 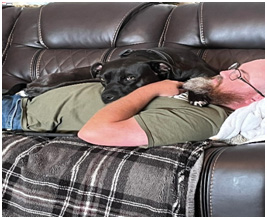 I was just a regular stray dog, nobody knows how long I was on my own, or what hardships I went through but me. I found my way to ARK, I was taken to a vet multiple times for various reasons (i.e.; skin issues, swollen toe). I spent almost a year there, before my perfect family came along. Now I get to spend my days chilling on the couch, playing outside, and snuggling the best dad ever. 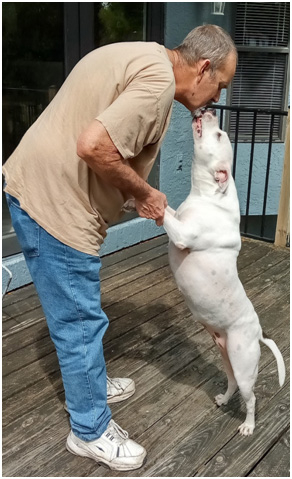 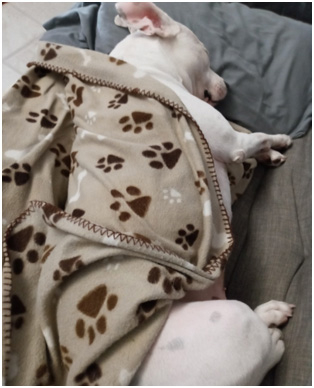